The Fundamental Differences Between Design/Build and Design-Bid-Build

As a homeowner, you’ll have many choices to make regarding your home remodeling project and your construction partner. Before you begin, it’s important to understand the differences between the two most common construction options: Design Build vs. Design Bid Build.

Understanding how design build vs. design-bid-build contracts work may help you better decide the type of remodeling contractor you need—and to find one whose approach suits both your comfort level and your pocket book.

For the next five weeks, MainStreet Design Build invites you to explore these fundamental differences to make a decision that is just right for you.

The Design-Bid-Build process begins when a homeowner hires an architect and/or multiple designers to finalize details of the construction process without any input from a contractor. This can be a potential issue because a contractor’s involvement early in the process helps to contain the project budget. Once a contractor is chosen, he/she is responsible for building the remodeling project according to the design. Typically, at this time, costs for interior design selections have not been discussed or determined. As such, there is a higher risk of “scope creep,” costly design revisions or delays.

Design Build firms employ a designer or architect and general contractor in the same entity. So, instead of reviewing multiple bids, the homeowner leverages the expertise of a designer and builder early in the design process. The process begins with an analysis of the home’s condition and a conceptual design, from which a pre-estimate determines the project’s budget. During this time, the homeowner has the freedom to explore multiple design options and their associated costs without recourse. The homeowner is then presented with detailed design drawings that result in a comprehensive cost estimate of the proposed construction project.

This eliminates the time that would be spent soliciting and reviewing bids from multiple contractors. It also prevents you from selecting less qualified contractors to meet unrealistic budget constraints, if a project is “over designed.”

What is your preference? 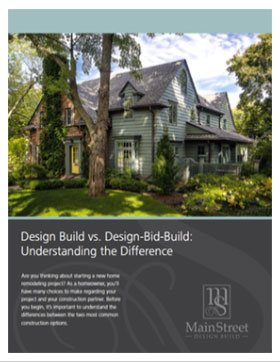